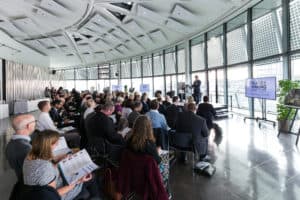 Paul Toyne was commissioned to design the format and content for a half day meeting at the GLA’s City Hall where the proposal for a new Place and Making Institute in Thamesmead, Bexley was unveiled on 1st November 2017.

Paul chaired the event which attracted over a 100 guests, many of whom signed a pledge to support the proposal and establish a much needed new technical college to service the built environment sector with new skills and expertise.

The idea for the Institute was developed by the London Borough of Bexley and Peabody, who have agreed to provide the land on which the Institute can be built. London South East Colleges have joined them to take the idea forward.

After the event Gill Steward said: “I was delighted by the attendance and the enthusiastic response to the proposal from across the wide range of organisations who took part, many of which have told us they are keen to be involved.”

For more information at the proposal: https://www.bexley.gov.uk/news/growing-support-proposed-place-and-making-institute